The Cisco 4410N WAP has been irradiating teachers and children in the classroom, pictured below, every minute of every school day — unnecessarily.. The pulsed, data-modulated, RadioFrequency Microwave radiation (RF Microwave radiation) exposures in this classroom exceed federal maximum public guidelines many times, every day, based on total cumulative radiation exposure. This cumulative calculation method was confirmed by senior FCC and OSHA engineers. In August 2013, these engineers analyzed pulsed, data-modulated, RadioFrequency Microwave radiation measurements in this classroom and agreed that the math driving the animation, below, is correct. See the totals below.

Please note, the calculated totals exclude radiation from any wireless devices in use in the classroom. Actual totals could be 25x-30x higher when students are using wirelessly-connected iPads, Chromebooks or laptops. Similar total cumulative RF Microwave radiation exposure levels can be calculated for any classroom in the school district, using information provided by California Public Information Requests, accurate RF Microwave radiation measurements and these FCC-and-OSHA-approved calculations.

In the 2017-2018 school year, in 180 school days which is 1,080 hours, the Valley Vista School exposed its kindergarten students and teachers to over 13.6 Billion µW-seconds/m² of RF Microwave radiation, which is over 1,360 times higher than the FCC's adult maximum public exposure guideline of 10 Million µW/m². 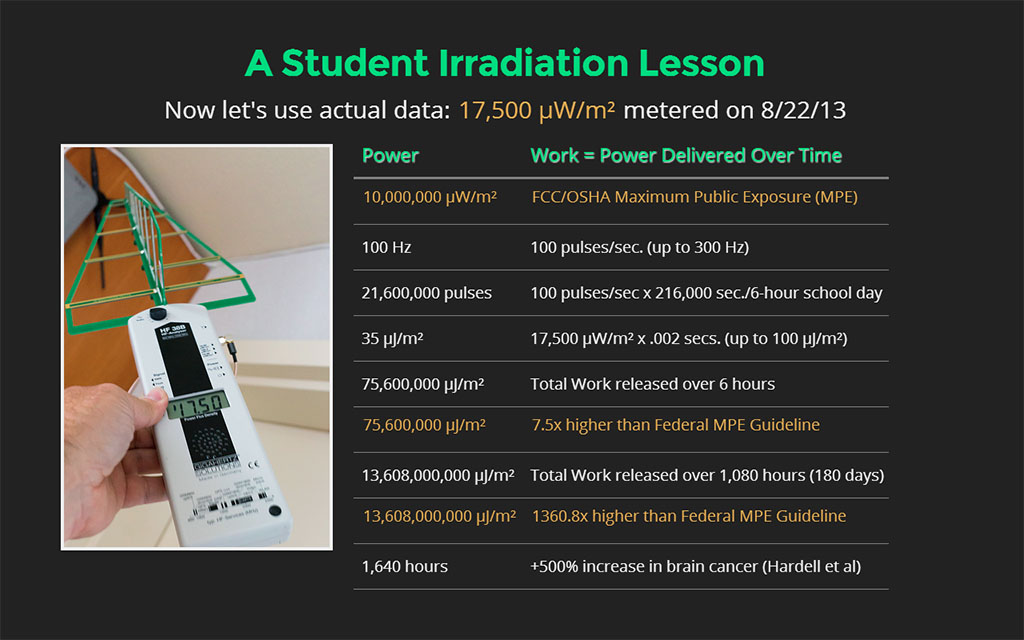 I purchased GigaHerz Solutions meters and attended the one week training from the International Institute For Building-Biology & Ecology to make sure I knew everything I could about how to properly measure and mitigate RF Microwave radiation. I devoured the information at antenna-theory.com and had multiple conversations with James Cassata, Executive Director of the NCRP, Edwin Mantiply of the FCC Office of Engineering and Technology, and Jeffery Lodwick of Federal OSHA as I shepherded an OSHA claim against my school district through the system in July/August 2013. I insisted on reaching agreement, in writing, on how one should calculate total cumulative RF Microwave radiation exposure before OSHA compared this total to any existing standards. I got the agreement in writing:


These agreed-to calculations are a wedge that can open the door to shed light on the fallacies of our country's current Federal RF Microwave radiation exposure guideline. Newton's law of conservation energy of helps us: his law states that the total Energy of an isolated system cannot change — it is said to be conserved over time. Therefore, Energy may be transformed from one form to another, but it cannot be created or destroyed.

Energy is often a confusing term in this discussion, because our general notion of energy is not consistent with the stricter definition of Energy in physics. People usually think of Energy as something that is being consumed or used up, but according to Newton's Law: Energy is always conserved. Energy in one form is therefore converted into Energy in other forms; it is never used up or consumed.

Energy is an indispensable prerequisite for performing Work. Energy comes in multiple forms: kinetic, potential, thermal, chemical, electromagnetic, and nuclear. Energy is required to do the work and the Energy can only be converted and/or transferred, but never lost or generated anew. Work and Energy are inextricably connected.

Let's avoid the term Energy and instead focus on Work, which is the total Power delivered over time.

One has to apply a sufficient amount of Power over time to do any Work:

The FCC maximum public exposure guideline for RF Microwave radiation exposure cannot be relied upon because it is not protective, not reflective of current scientific understanding and based on three fallacies:

Here is the logic for the calculations, above:

Once we know the inputs, we can calculate the total cumulative RF Microwave radiation exposure for each wireless device (router, access point, tablet, chromebook and laptop). Importantly, these exposures are additive: the more wireless devices around us, the higher the exposure and the more data transmitted, the higher the exposure. That is why choosing to stream a video wirelessly is the most dangerous RF/EMF microwave radiation choice anyone can make.

In the end, we have Apples (total cumulative power over time) and Oranges (the Federal maximum public exposure guideline):

It is self-evident to each of us that total exposure over time is what really matters: 30 minutes of unprotected exposure to mid-day sun may give us a sun tan, but several hours of unprotected exposure to mid-day sun would most likely give us a sun burn. Same thing happens when we cook a potato in a microwave oven: 100% power x 5 minutes = one cooked potato and 50% power x ten minutes also = one cooked potato. It doesn't help to know just the instantaneous measurement of power density. That is meaningless. You need to know the total power delivered over time and if this amount of Work (power delivered over time) is sufficient to achieve the effect.

The fact that the Federal RF Microwave radiation exposure guideline has no concept of total power delivered over time is insane. Yes, it sounds as if the guideline deals with time (a nominal 30 minute period for public exposure and a nominal 6-minute period for occupational exposure), but that is merely a convention used to ease the measurement process. Press the FCC on this and they will admit that they view the FCC guideline as an amount of RF Microwave radiation exposure (10,000,000 µW/m2) that one can receive indefinitely, 24/7 — forever — for each wireless device in the room.

What if there are 24 wireless devices in the room totaling 240,000,000 µW/m2? The FCC guideline does not address this. The Federal RF Microwave maximum public exposure guideline cannot be relied upon to protect anyone from long-term health effects.

75,600,000 is 7.5 times higher than 10,000,000. That's the truth that opens the door to finally shine the light on the fallacies of the Federal maximum public exposure guideline for RF Microwave radiation exposures.